With its picturesque bridges and squares, grand architecture, and breathtaking panoramic views, Rome has been one of the most frequent film locations alongside Paris, London, and New York. Embark on a cinematic journey through the city’s streets to discover the actual locations from your favourite movies. 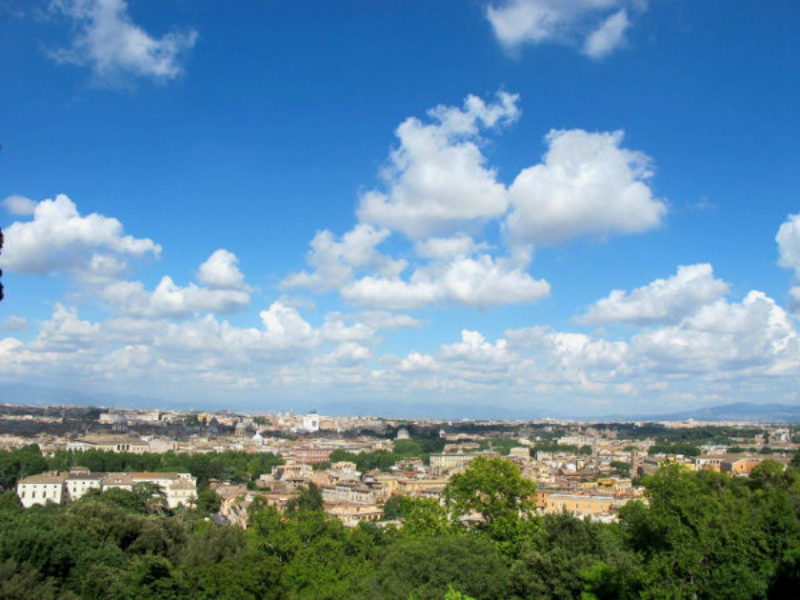 We will start from Fontana dell’Acqua Paola on Janiculum Hill (Gianicolo), to see the panoramic view over the capital, as in the opening scene of Paolo Sorrentino’s The Great Beauty (La Grande Belezza). This 2013 Italian comedy-drama tells the story of Jep Gambardella, an aging writer, who decides to move away from his decadent lifestyle in Rome and finds escape in the beauty around him. This movie is a great way to relive your time in Rome even after the journey is long over. 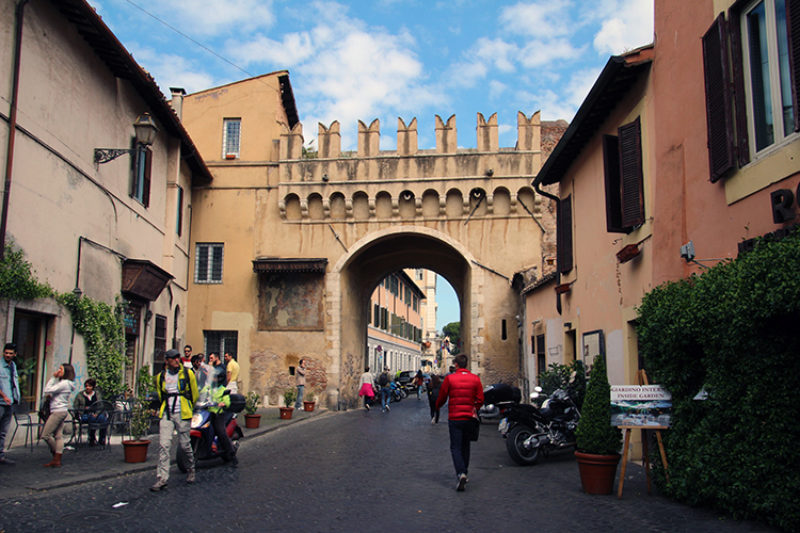 Continue your way down the hill along Via Garibaldi to Via della Scala. Woody Allen chose this charming little square with ivy-covered houses to film several scenes of his To Rome with Love (2012). It first appears in the movie when the architect John (Alec Baldwin), who returns to Rome where he once lived, meets Jack (Jesse Eisenberg), a young student living in Trastevere district. Enjoy a quick espresso at Caffe Settimiano at Porta Settimiana, which also appears in the movie later on. 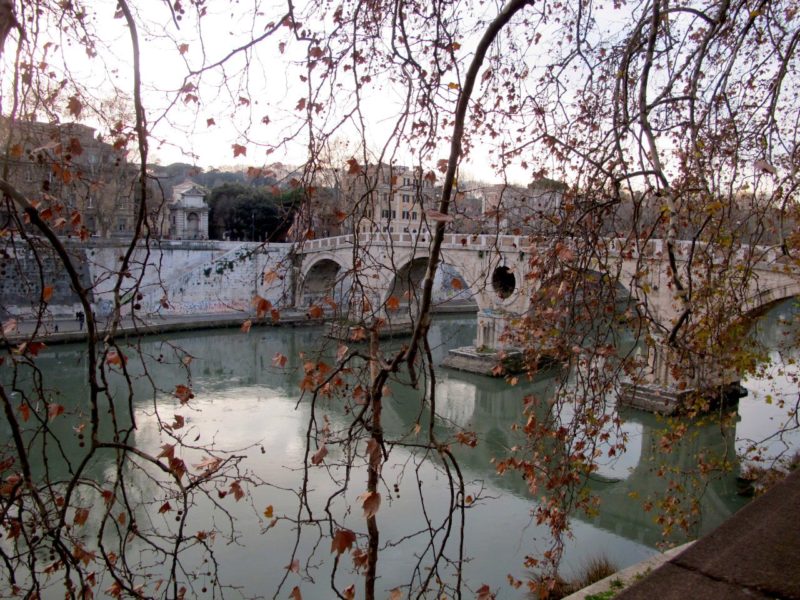 We continue our way through the quaint narrow streets of Trastevere district, which served as the backdrop for many other movies, including Eat Pray Love (2010) with Julia Roberts.

After a short walk we reach Ponte Sisto, which appeared in one of the key moments of Spectre (2015), the twenty-fourth film in the James Bond series, starring Daniel Craig. Shortly after his arrival to Rome, Bond ends up in a car chase through the city centre, St Peter’s Square and along Lungotevere, the road which runs along the bank of the River Tiber. Reaching Ponte Sisto, Bond crashes his car into the river after escaping with the ejection seat. 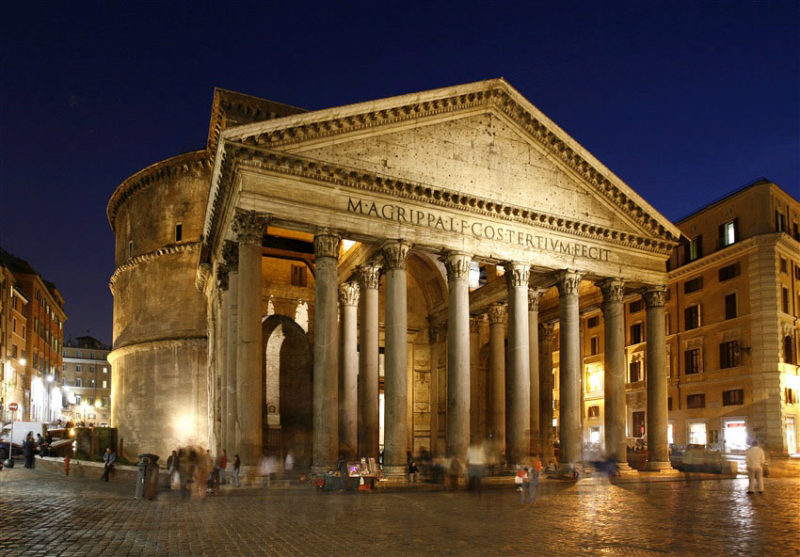 Cross Ponte Sisto and walk to our next stop - the Pantheon. On your way follow the example of Elizabeth from Eat Pray Love and visit Sant’Eustachio caffe (Piazza di S. Eustachio, 82) for one of the best coffee experiences in Rome.

The Pantheon’s unique building has appeared in numerous movies, including Peter Greenaway’s The Belly of an Architect (1987). The story of Stourley Kracklite (Brian Dennehy), an architect who arrives in Rome to organise an exhibition, is an intriguing puzzle of visual and philosophical references. The Pantheon, ominously lit in red, and Piazza della Rotonda in front of it, serve as the perfect setting for the film’s opening scene - a night dinner, where Kracklite celebrates his birthday with a Pantheon-shaped cake.

Another memorable appearance of the Pantheon was in Ron Howard’s Angels and Demons (2009). While attempting to solve the mysterious murders of several Cardinals in the Vatican, symbologist Robert Langdon (Tom Hanks) follows clues that are connected to different Roman locations. After mistakenly taking the Pantheon’s oculus (the opening in its roof), for the ‘demon hole’ in one of the clues, Langdon misses his chance to prevent the first murder. 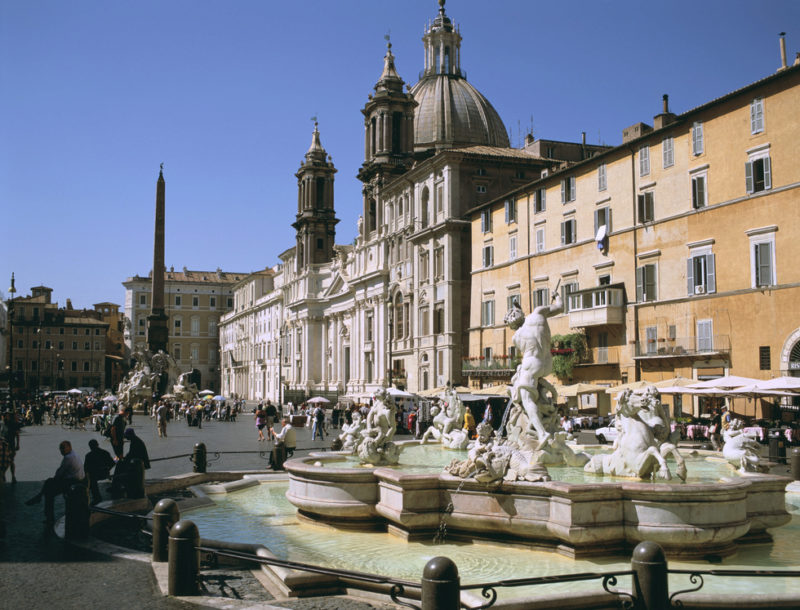 Moving on to the next stop in our cinema tour, we reach Piazza Navona, possibly one of the most famous squares in Rome. Due to its dazzling Baroque fountains by Bernini and unusual elongated shape, this place became a frequent filming location.

For example, in Angels and Demons the square’s Fountain of the Four Rivers represents the fourth element, ‘Water’, and is the location of the fourth cardinal’s murder. In Eat Pray Love Elizabeth (Julia Roberts) chooses Piazza Navona to eat one of her first ice creams in Rome, sitting on a bench with two nuns.

The square is featured several times in Anthony Minghella’s psychological thriller The Talented Mr Ripley (1999). Tom Ripley (Matt Damon) comes to Italy to find Dickie Greenleaf (Jude Law) and persuade him to return to America. During their trip to Rome they meet Dickie’s friend Freddie Miles (Philip Seymour Hoffman), who theatrically appears in front of a café on Piazza Navona. Later on, Tom Ripley returns to Rome after killing Dickie Greenleaf and assuming his identity. Here, Piazza Navona serves as the location of an accidental meeting between Tom and Meredith Logue (Cate Blanchett), who mistakenly believes that Tom is Dickie. 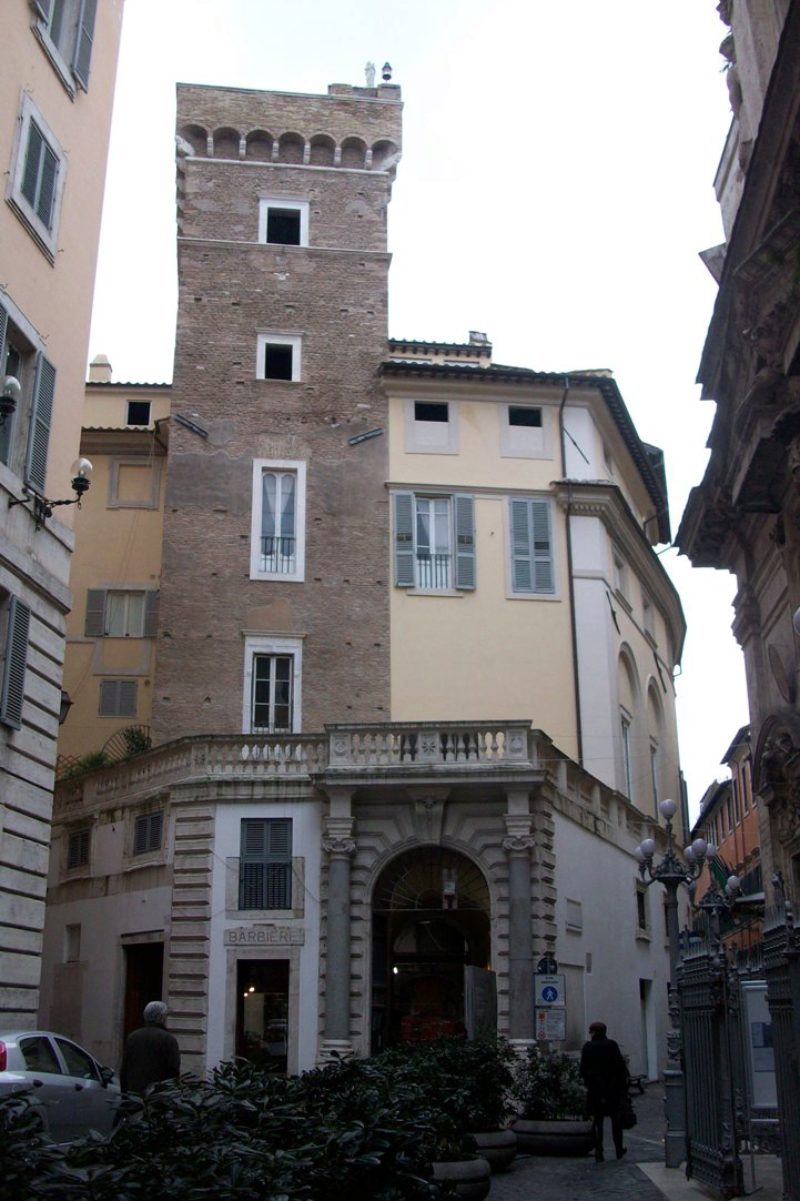 Our next stop is another location from Eat Pray Love - Elizabeth’s apartment. If you found yourself wanting to live in this area after watching the movie, do not miss the chance to book yourself a room at Hotel Portoghesi next door. 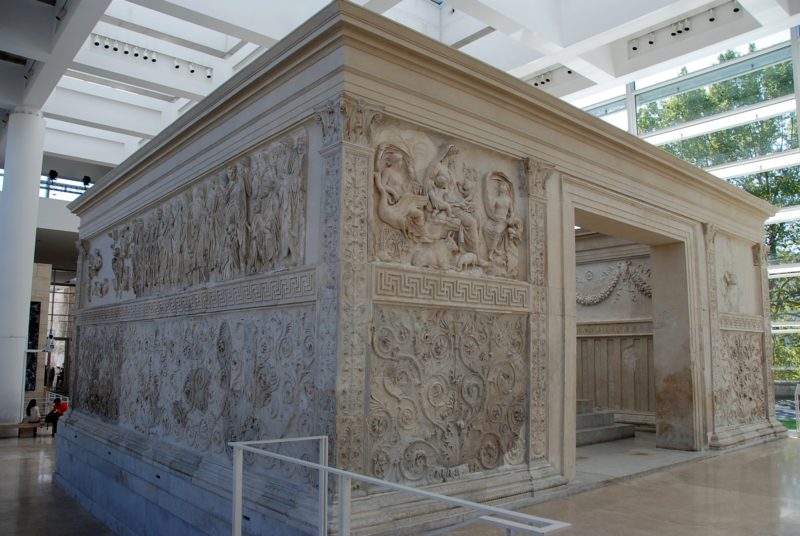 Take Via della Scrofa, which later changes into Via di Ripetta. On your left you will see a modern-looking glass building by American architect Richard Meier. It was created in 2006 as a cover for Ara Pacis, an ancient altar dedicated to Pax, the Roman goddess of Peace. Consecrated and destroyed in 9 BC, the monument was reassembled in its current location in 1938.

The monument appeared in Bernardo Bertolucci’s The Conformist (1970), in the scene where Marcello Clerici (Jean-Louis Trintignant) goes to visit his fiancée Giulia (Stefania Sandrelli) and notices a black car following him.

In 2012 Ara Pacis was chosen by Woody Allen as a location for a fashion show in To Rome with Love. Leopoldo (Roberto Benigni), an ordinary citizen turned celebrity overnight, attends the fashion show, where models dressed in white lingerie and wigs, come out of the altar. 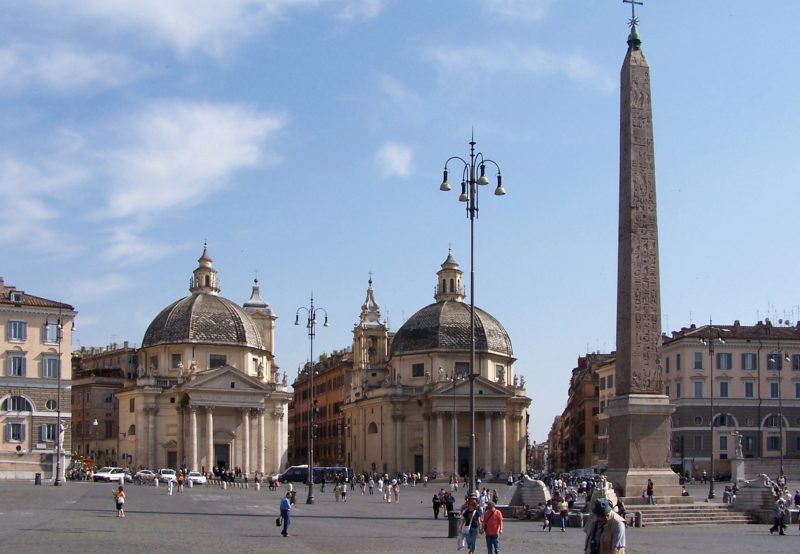 Going further along Via Ripetta we reach one of the most popular Roman squares - Piazza del Popolo. Hardly any movie set in Rome skips this location. Located at the northern gates of the city, this was the traveller’s first view of Rome upon arrival before the development of railroads. Indeed, this is the first view of Rome in Peter Greenaway’s The Belly of an Architect.

In Angels and Demons Robert Langdon comes here, to Santa Maria del Popolo on the north side of the square, following the clue about the first element, ‘Earth’. Inside the church’s crypt he finds the first cardinal killed with his mouth crammed with soil. Until 1826, the Piazza del Popolo was in fact used for public executions. 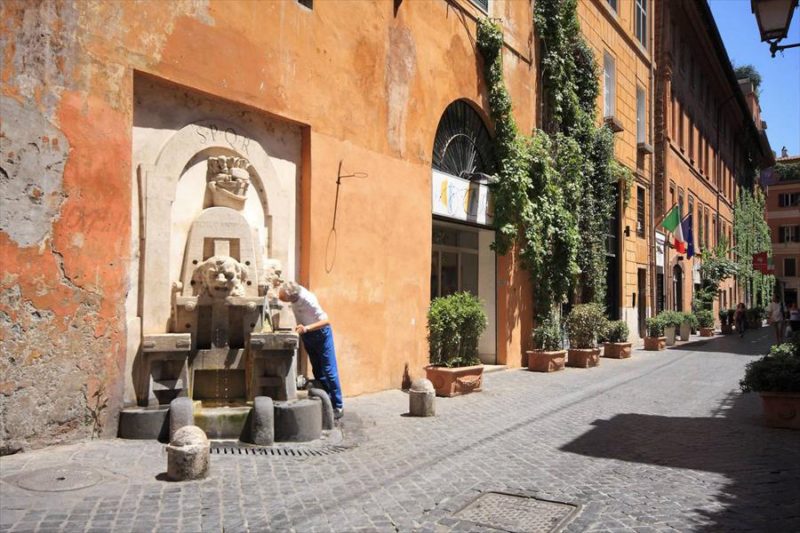 Let’s leave the square and take Via Babuino towards Via Margutta. The area, that attracted many artists and art galleries, became even more popular after it appeared in William Wyler’s Roman Holiday in 1953. Joe Bradley (Gregory Peck) is an American reporter, living in Rome at Via Margutta 51. One night he accidentally meets Ann (Audrey Hepburn), a royal princess, who escaped to see Rome on her own. Woody Allen pays homage to this classic movie, bringing John (Alec Baldwin) to via Margutta, his old neighborhood in To Rome with Love.

The street’s cinematic history continues in real life, as acclaimed film director Federico Fellini and his wife Giulietta Masina also lived on Via Margutta, at number 110. 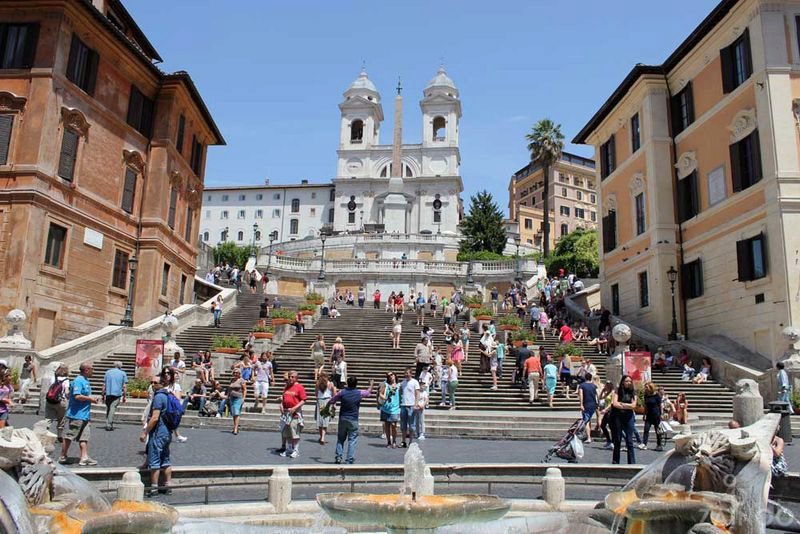 Follow Via Margutta until it changes into Via Babuino and you find yourself on Piazza di Spagna, at the foot of the Spanish Steps. Another iconic location in Rome, it can also be seen in The Roman Holiday, when Joey (Gregory Peck) shows young princess (Audrey Hepburn) around Rome, eating an ice-cream on the Spanish Steps.

The Steps are also featured in The Talented Mr Ripley, when Ripley accidentally meets Marge (Gwyneth Paltrow), who is looking for her fiancé, Dickie, who unbeknownst to her is dead. 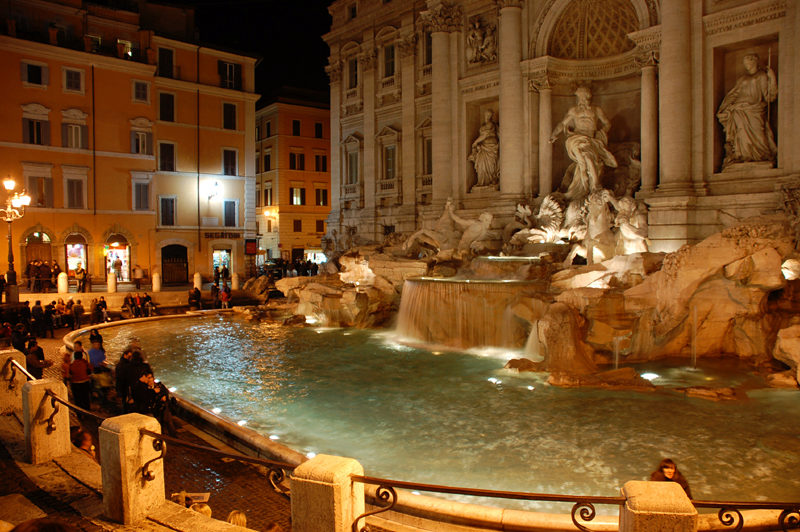 Continue your way along Via di Propaganda to Via Polli to discover may be the most iconic cinema location in Rome - Trevi Fountain. Even if you have never watched Federico Fellini’s La Dolce Vita (1960), you may know its famous scene in the fountain. Finding themselves alone after a party, journalist Marcello Rubini (Marcello Mastroianni) and actress Sylvia (Anita Ekberg) wander around the streets of Rome, ending up at the Trevi Fountain. Sylvia decides to enjoy the freshness of its waters in the heat of the Roman night, successfully luring Marcelo to join her. As much fun as the scene may seem, it is not advisable to repeat it if you do not want to face a 500 Euro fine.

In general, Trevi Fountain is one of the inevitable elements of any Romantic movie set in Rome, including The Roman Holiday and To Rome with Love. 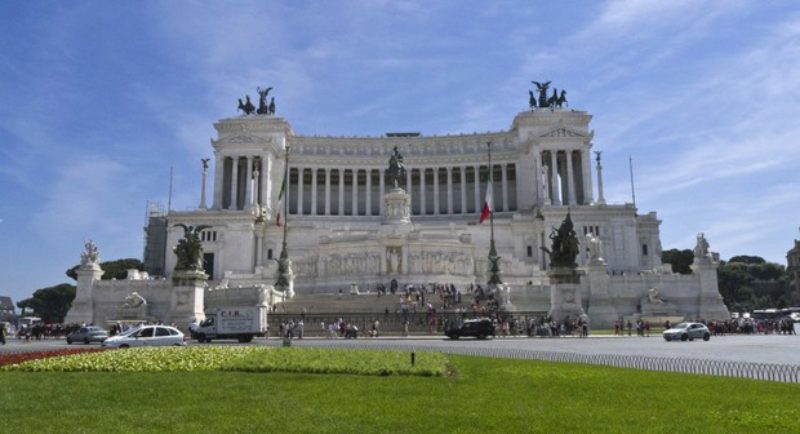 Find your way to Via del Corso and follow it south until you reach Piazza Venezia. With its controversial white-marble Vittorio Emanuele Monument, it is a great location for dynamic movie scenes. Woody Allen starts his To Rome with Love with the monologue of a traffic policeman who is standing in the middle of the square’s turbulent traffic. Watch The Roman Holiday to catch a glimpse of the monument while the main characters ride on a Vespa through the city centre.

Peter Greenaway chooses the Vittorio Emmanuele Monument as an office for the architect Stourley Kracklite, the protagonist of The Belly of an Architect. 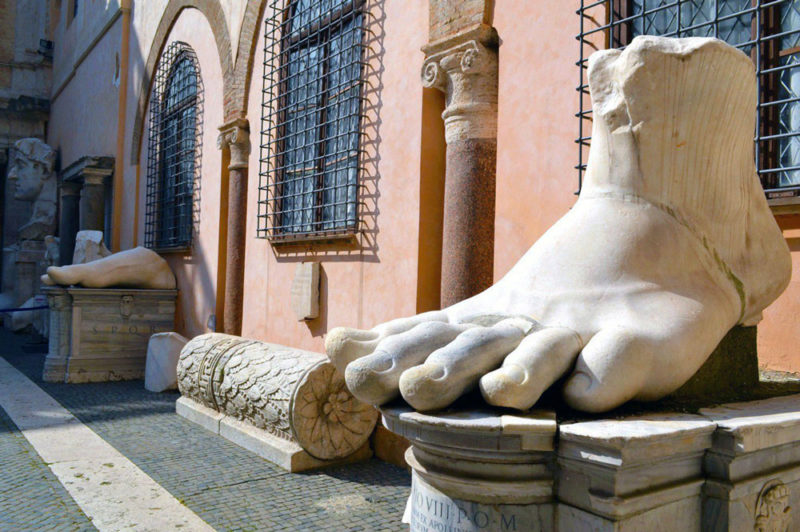 Our last stop of this cinematic journey is the Capitoline Hill or Campidoglio, located nearby. Take Via del Teatro di Marcello and go up the hill. Since the time of Rome’s foundation the Capitoline Hill has been the centre of Rome’s political Power, where many of the city’s most important buildings have stood on. Today the hill’s palaces house the Capitoline Museums. One of its buildings, Palazzo dei Conservatori has a striking courtyard filled with fragments of ancient colossal sculptures, creating a magnificent film setting. Peter Greenaway chose this courtyard for the scene of Stourley Kracklite’s interrogation in The Belly of an Architect. And in The Talented Mr Ripley, the protagonist Tom Ripley, upon his return to Rome after Dickie’s murder, also pays a visit to the Capitoline Museum and enjoys the view over the Roman Forum from the Capitoline Hill. 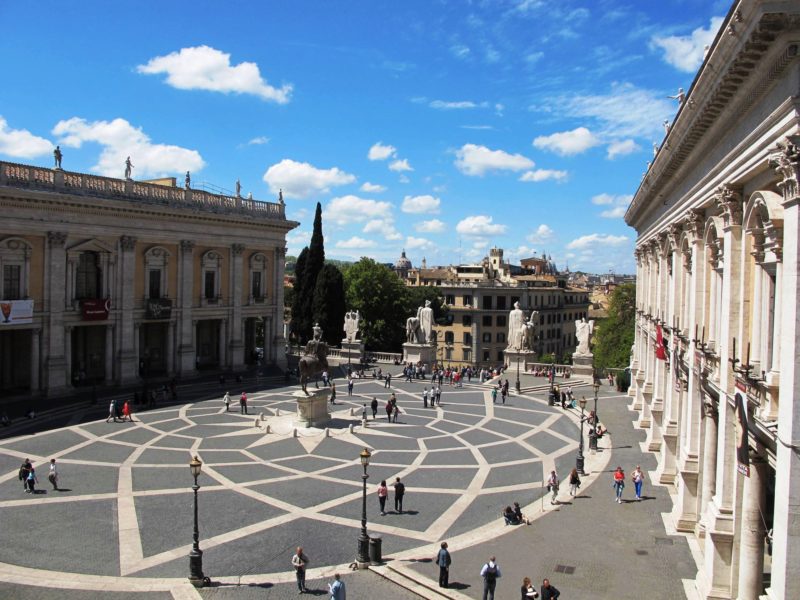 Andrey Tarkovsky also chose Campidoglio as a setting for one of the final scenes of his 1983 film Nostalgia. Here, former patients of the asylum organise a blatant hoax to warn humanity about the coming apocalypse, while their leader saddles up Emperor Marcus Aurelius equestrian statue and sets himself on fire.

If hunting for cinema locations in Rome made you want to become a character from one these movies, rent a Vespa and explore the city centre and other areas of Rome on the go, as the characters of The Roman Holiday or Nanni Moretti in his Caro Diario (1993). In the first part of Caro Diario we follow the director/protagonist riding a Vespa through the areas of a summery and half-deserted Rome. Views of landscape, architecture, and beautiful monuments accompany the character’s thoughts, which range from critiques of Hollywood cinema to sociology and urbanism.