Another year is coming to an end, and with the holiday season ahead many of us plan a Christmas trip to a new or familiar destination. Whether you know London well, or are planning your first visit to the capital of Great Britain, have a look at our Christmas activity suggestions to make the most of your trip to the city that is transformed by twinkling lights and Christmas trees.

1 - Get into the holiday spirit at the Christmas markets

If you are looking for a Christmas present, a souvenir from your London trip, a fun family day out, or an unusual place for a date, the capital’s Christmas markets can be the perfect place. In addition to major Christmas markets in central London, every borough organises local markets in early December to support local craftsmen, so there are a variety of different options to suit your fancy.

If you are spending holidays with children, start from Leicester Square to visit Santa’s Grotto, the traditional Christmas market, and a vintage Spiegeltent - a wooden venue presenting various festive shows, including a circus performance (on until 8 January 2017). Continue your celebrations at Winter Wonderland festival in Hyde Park with its Christmas markets, ice skating rink, circus performances, Santa’s grotto, and fairground rides (on until 2 January). A selection of themed bars, including the Ice Bar, will put you and your friends in tune with the spirit of Christmas. Alternatively, spend an evening in South London, exploring its three major markets. Housed in cosy wooden chalets, the markets at the Southbank Centre (until 8 January), Tate Modern (until 23 December 2016), and London Bridge (until 3 January) offer an inviting combination of handmade gifts, tasty food, and mulled wine to keep you warm on a crisp London evening.

2 - Brighten up your evening with London’s Christmas lights 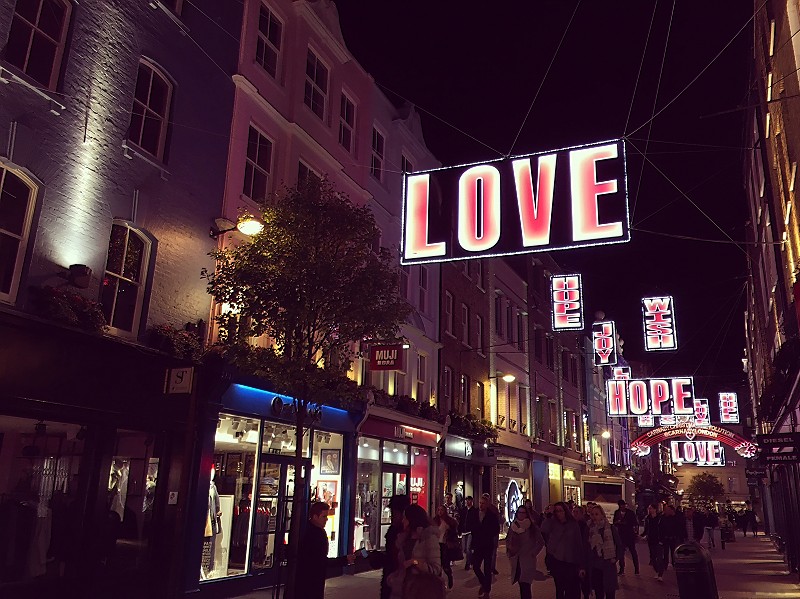 December is one of the darkest months in London, but Christmas lights may help you forget about it. Until 6 January 2017 the city centre is illuminated by lights of different shapes and forms. The switching of Oxford street’s Christmas lights became a tradition in itself, marking the beginning of the festive season. Spend an evening wandering around the Strand, Covent Garden, Regent Street, and Bond Street for some of the most amazing season’s light installations. Do not miss Carnaby Street’s special display, dedicated to the current exhibition at Victoria & Albert Museum ‘You say you want a Revolution? Records and Rebels 1966 - 1970’. Responding to the show about the influence of the late 1960s on music, design, fashion, and political activism, this shopping street is decorated with lights around the theme of ‘Love’, ‘Hope’, ‘Joy’.

If you want something special this Christmas, take a trip to Kew Gardens, where special illumination turns the botanical gardens into a Christmas wonderland. Wander among brightly illuminated trees, temples, and glasshouses, and enjoy special features of the festival, including a Tunnel of Lights, scented Fire Garden, vintage rides, and the North Pole village. The lights are on until 2 January, and the tickets can be booked on the official website.

3 - Embark on a Christmas tree trail 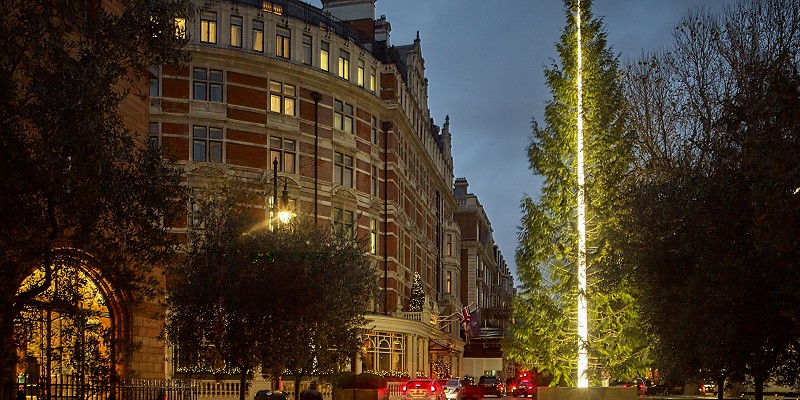 There is no Christmas without a Christmas tree, brightly lit and decorated with toys, and a star on top. Every year London’s squares and stores compete with each other, putting together some of the most traditional or unusual versions of this holiday’s symbol. Surprisingly, one of the most famous Christmas trees in London does not have any lavish decorations, yet remains most important. Traditionally presented by the city of Oslo, since 1947, the Christmas tree on Trafalgar Square is a symbol of enduring gratitude to the British for their support to Norway during the Second World War.

Pop in some major London hotels such as Brown’s in Mayfair, The Savoy in Covent Garden, or the Ritz in St James to see the results of their collaborations with major brands and designers. A Christmas tree commission at Victoria & Albert Museum became another seasonal landmark of London. This year StudioXAG went further and designed the festive look of the museum from top to bottom with unique trees and hanging garlands, inspired by the museum’s collections. The square in front of The Connaught hotel in Mayfair is also a home to special Christmas commissions. This time the acclaimed British sculptor Antony Gormley installed a Western Red Cedar with no decorations, but the tree trunk is illuminated by a central pillar of light. Presenting his work, Gormley said that “at this, the darkest time of the year and at a moment of global dysfunction, I hope this magnificent tree conveys a feeling of continuance and vitality.”

4 - Join one of the Christmas carols concerts

‘Jingle bells, jingle bells, jingle all the way…’ If this is the song you have on your mind in December, then enjoy the numerous carol concerts across London, from tube stations or a local churches, to Westminster Abbey and St Paul’s Cathedral. While many concerts at the latter venues are free, you should book in advance your tickets for the two major concerts at the Abbey on the 23rd and 24th December. For a truly magical concert of carols and seasonal classics by candlelight, book your tickets for performances at the Royal Albert Hall. Carols singing at Trafalgar Square is another London tradition. Join one of the 40 singing groups beneath the Christmas tree to sing along, and contribute to various charities.

5 - Ice skate at some of the most famous London sights 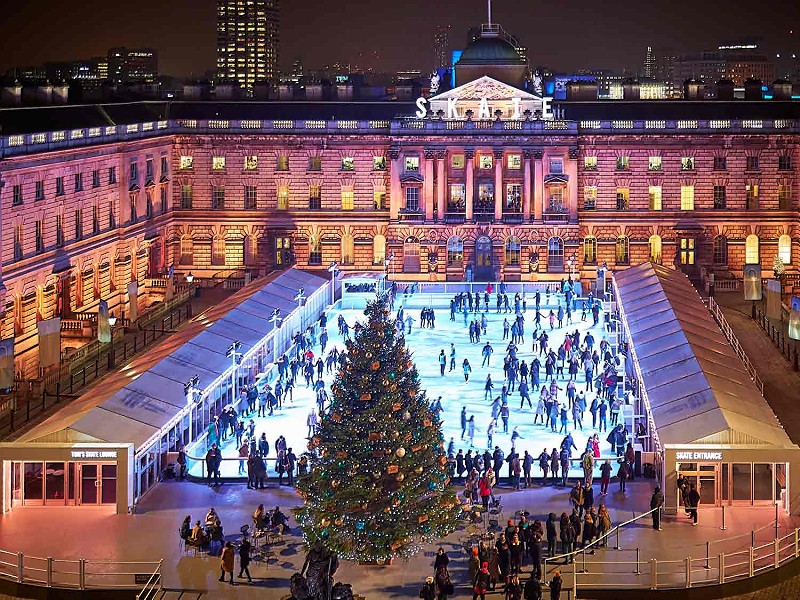 If you cannot imagine a Christmas holiday without winter sports, join others at one of London’s ice skating rinks. Set to the backdrop of the city’s iconic locations, and decorated with lights and Christmas trees, the ice skating rinks will become some of the most magical and unforgettable experiences of your London trip. Skate at the Canary Wharf ice rink to marvel at the imposing backdrop of one of London’s busiest business districts, visit one of the most enchanting ice rinks at the Natural History Museum, enjoy the architecture of Somerset House and fine dining from Fortnum & Mason, or glide together with the Tower of London’s guards in the moat of the ancient fortress.

A visit to a museum may sound as an unusual idea to get your Christmas spirit fix, but not in London. Explore different festive themes in works from the National Gallery’s collection. Their website offers handy printouts, which can help you to take a closer look at angles across the collection, the story of the Nativity, or discover the stars in shimmering Renaissance altarpieces, or Turner’s landscapes.

The Geffrye Museum of Home transformed their period rooms with authentic historic festive decorations, lighting and music, giving an insight into Christmas celebrations in England over the past 400 years. The Victoria & Albert Museum in South Kensington prepared two special displays on Presepio, an Italian Nativity scene, and Victorian Christmas cards. If you are interested in English literature, pay a visit to the Charles Dickens Museum. Every year, the historic interiors of the writer’s home are decorated to recreate the atmosphere of an authentic Victorian Christmas celebration.

7 - Travel on a budget with Christmas window shopping 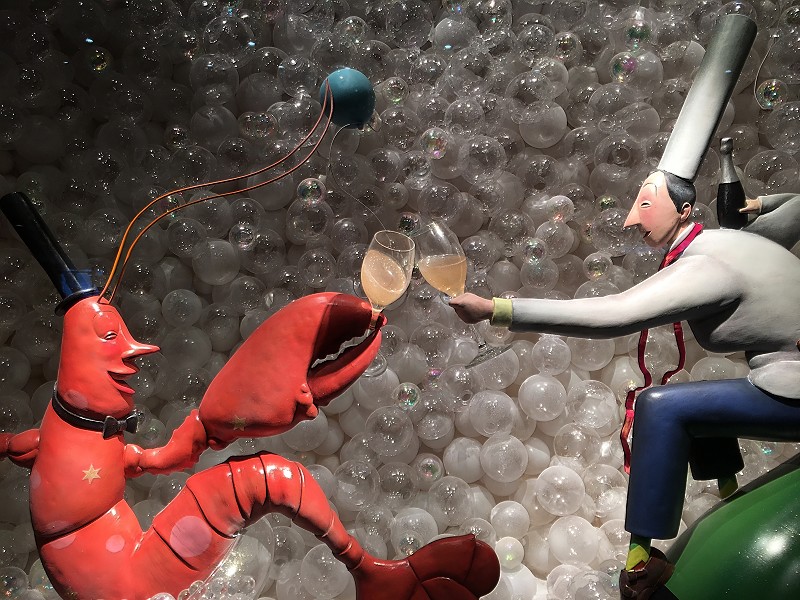 Christmas shopping can be an exhausting affair, but do not forget to have a break, and enjoy the Christmas window displays at stores across London. Start with Harrods, where windows are transformed into a series of theatrical stages with lights and velvet curtains, and an underground mice world, celebrating their own miniature Christmas. Continue with the mice theme at Liberty, where the windows’ design is inspired by Tchaikovsky’s The Nutcracker, and presents scenes from this classical Christmas ballet. Fortnum & Mason, one of the oldest and largest department stores in London, set each window as an independent story about characters usually divided in real life, but brought together for Christmas.

8 - Book yourself a Christmas theatre fairytale

Performances in London’s theatres change every season, but classic Christmas ballets always return to the stage in December. Both Royal Opera House and English National Opera bring back Tchaikovsky’s much-loved The Nutcracker, a magical Christmas story staged to an enchanting score in dazzling sets.

Christmas can be a very lonely time for people who do not have family or friends to visit, or the means to celebrate. If you would like to get involved in a charity event or support a local community during the holidays, check the websites of Crisis, the UK national charity for homeless people, or Volunteer Team, the official website for volunteers in London, to find out how you can help others this Christmas. Charity Choice is another website where you can sign up for charity events such as Santa Dash, and help raise funds for the cause of your choice. 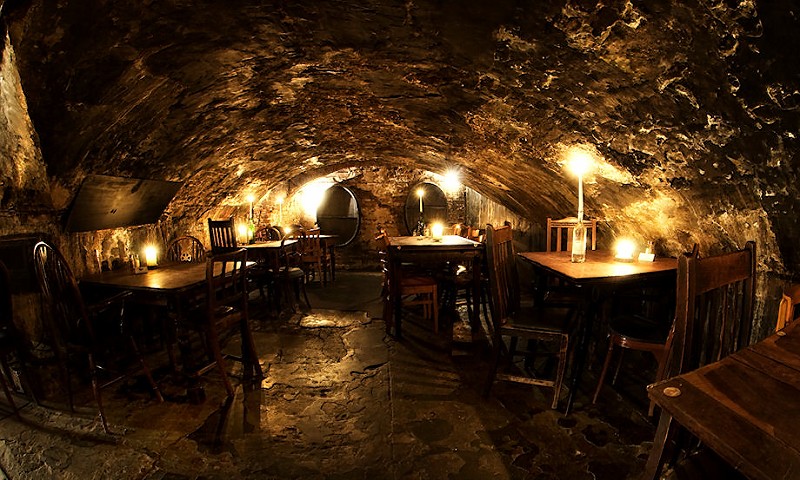 Nothing can be better than to relax in a traditional pub after a day of Christmas adventures. If you are in Notting Hill, don’t miss the evergreen Churchill Arms pub. Famous for its flower decorations, every December it turns into a Christmas tree itself with 80 conifers strapped to its exterior and decorated with 18,000 lights. If you are up for a comedy performance, spend an evening at The Joker, the cozy home of comedy evenings and a satisfying range of craft beer. For a quintessential Dickensian experience, toast to your new adventures at Gordon’s, London’s oldest wine bar with underground rooms and candlelight. 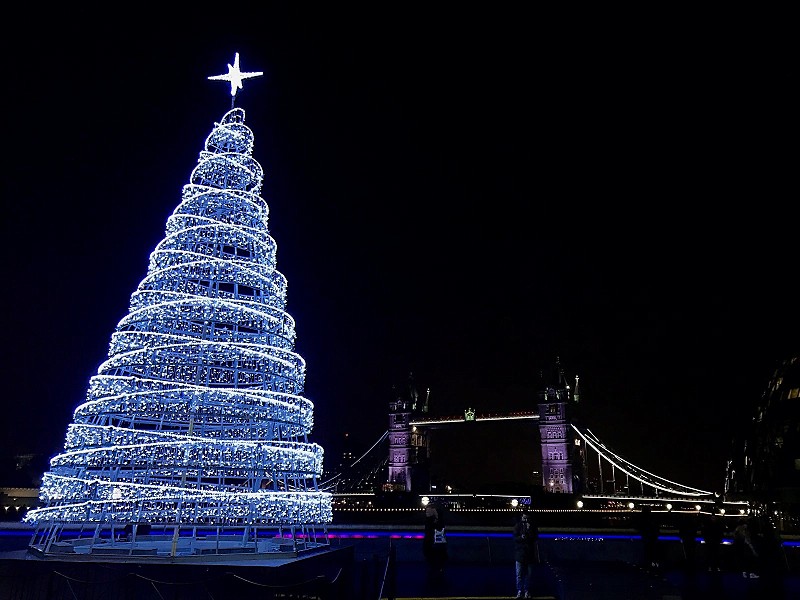 Christmas tree at the Tower Bridge / Photo by Matteo Morelli