Uncle Vanya is, perhaps, one of the most hopeless plays by Anton Chekhov. Talking about unfulfilled dreams and unrealised loves, it makes one recall their personal regrets and failures. However, its adaptation by the Maly Drama Theatre directed by Lev Dodin is surprisingly light, seemingly effortless, and inspiring. The show was staged at the Royal Haymarket Theatre and promoted by Belka productions.

Set in a remote Russian countryside, the play tells a story of a visit of a retired professor and his charming, much younger second wife, Elena, to the family’s estate. There they meet Voynitsky (or Uncle Vanya), brother of the professor’s late first wife and the estate’s manager, and Astrov, the local doctor. Consumed by boredom and regret over their disappointing lives, both of them fall under Elena’s spell and see her as their last hope for something better, brighter. At the same time Sonya (Ekaterina Tarasova), the professor’s daughter by his first wife, who has worked with Uncle Vanya, suffers from her unrequited love for Dr. Astrov. 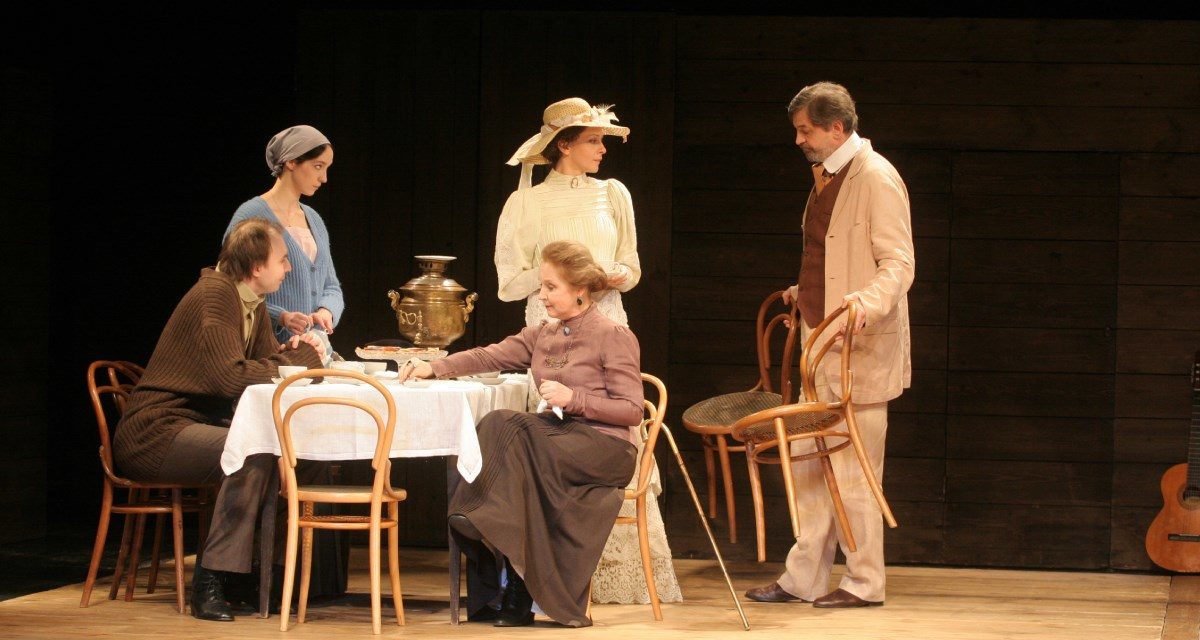 The atmosphere of provincial ennui is greatly supported in this performance by the stage design by David Borovsky. This is not a domestic environment: the scene is stripped bare from everyday life – plain walls, a wooden floor, a table, chairs. This is not an atmospheric performance: there is no music or any other sounds. There is only a drunken guitar plunking of Telegin, nicknamed “Waffles” (Oleg Ryazantsev), or rain and thunder which break the thick silence of the everyday measured by the stopped clock on the wall.

The most striking feature of the set design is three life-size haystacks which hover over actors’ heads during the performance, emphasising the stir at the estate caused by the arrival of the professor and his wife. Everything shifted from its usual place: lunch is served in the evening, tea is cold, and haystacks, which should be firmly standing on the ground, absurdly float above. 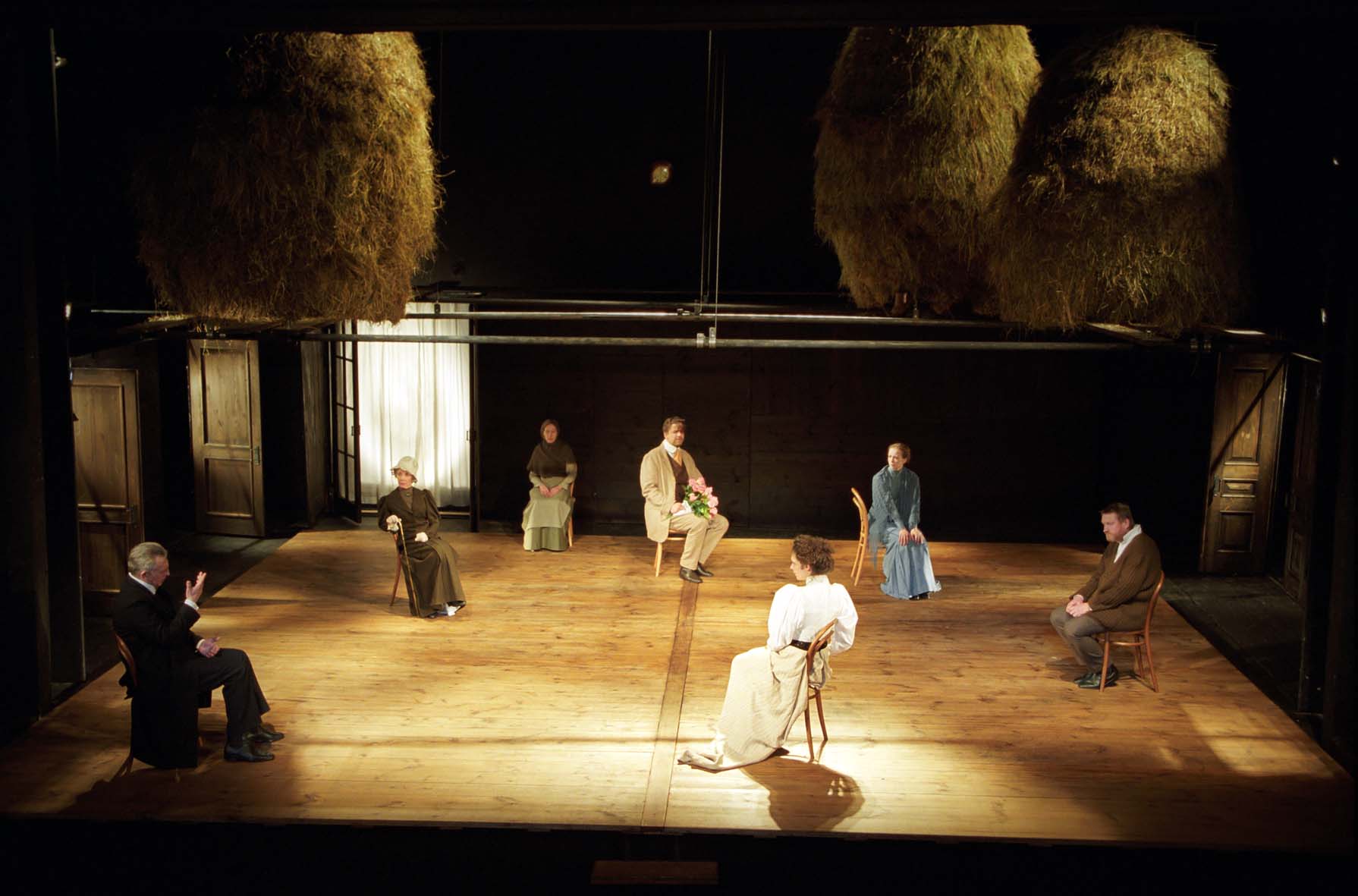 Stripping the production to bare essentials in visual terms, Dodin focuses on the performance and the play’s text to bring Chekhov’s characters to life. And actors respond to this challenge amazingly, re-living the story with freedom and passion, which are not hindered by the traditional approach to the directing. There is no overplaying or tension, everyone on the stage is a harmonious part of the whole. It is difficult to single out one or two actors in this play: they are all honest and vivid in their roles. Sergei Kuryshev is a perfect Uncle Vanya: a child who did not grow up; an awkward jester in the household, who no one takes seriously. Igor Chernevich’s Dr Astrov is a suitable companion to Uncle Vanya: a disillusioned man lost in his dreams of a greater, brighter future he would not see himself. Both Uncle Vanya and Astrov are so numb to the world around and to their own feelings that they have to drink to liberate themselves, but in reality it feels more like a desperation than joy. Even the glamorous Elena by Ksenia Rappoport, who seems satisfied in the beginning, reveals feeling unhappy and trapped in her marriage. Rappoport creates an arresting image of a woman who feels fragile and lost despite her glamorous appearance. 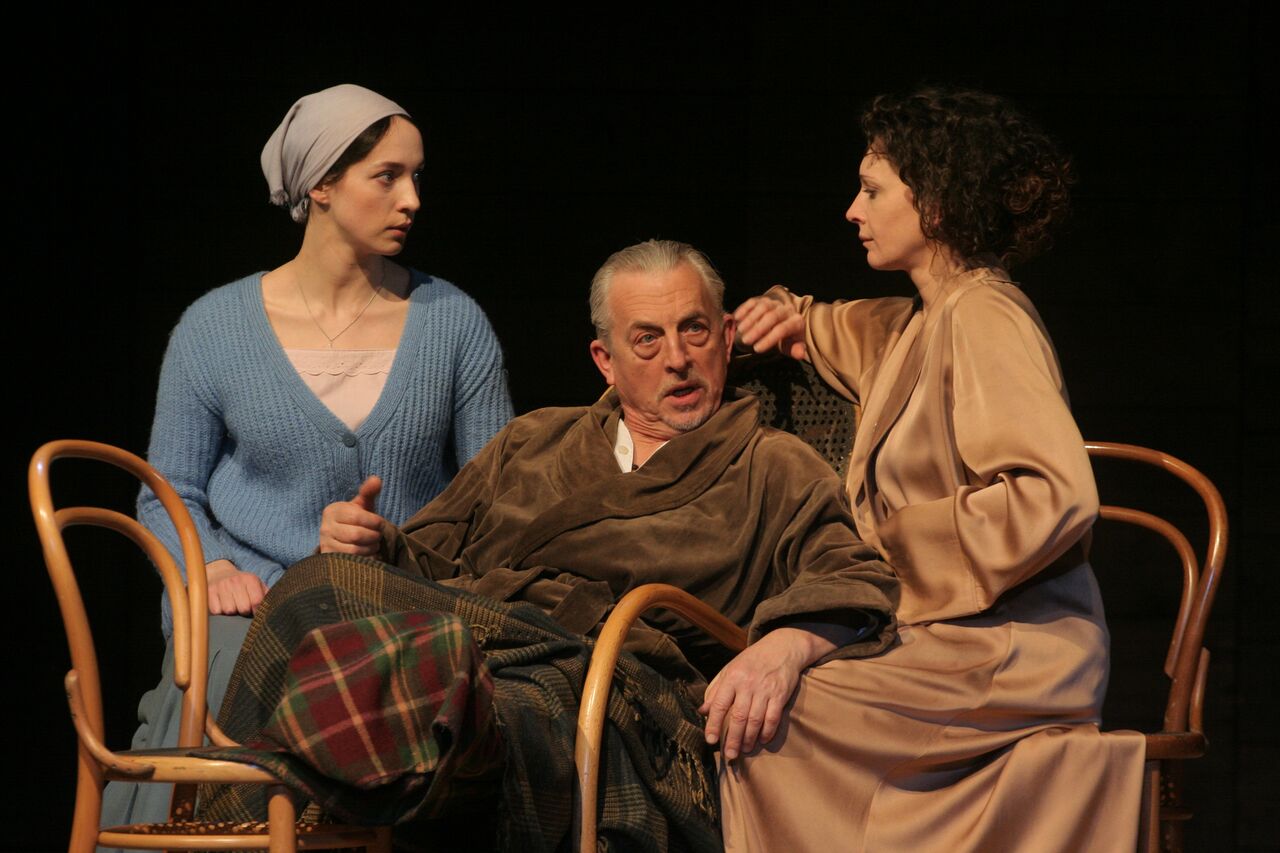 Unusually, Dodin addresses all monologues towards the audience, loud and clear, which brings out new nuances of Chekhov’s lines and allows the audience to understand the motives of the characters better. Sometimes it is funny, sometimes awkward, but mostly it is poignant and familiar. Many have had similar disappointments or regrets, and hearing them from a character created more than a hundred years ago makes the audience feel nostalgic but also, somehow, hopeful. If people managed to live with these feelings before, it will as well be possible today.

The play is quite anti-climactic, many things being left unspoken and unresolved. The professor and Elena leave the estate, and everything goes back to normal. Characters find escape in simple things and daily work: nanny reels the wool, Dr Astrov returns to his patients, Sonya refills the ink pot and sits down to work. It almost feels as a happy ending, although an unconventional one. The thunderstorm, the shot of Voinitsky, the loss of hopes and love – the characters experienced all of it and now left one to one with their lives and everyday chores. The garden dries after the rain and the floating haystacks slowly descend in the end, grounding the life of the estate.

This review was originally published on Russian Art and Culture.