TL;DR: In this post you will learn how to build a data dictionary of all the calculated fields for all the workbooks published on your Tableau Server or Tableau Online using Tableau’s Metadata API.

In one of my previous posts I wrote about Tableau’s Metadata API and some simple queries to get started with it. Ad-hoc queries are useful to get quick answers about data sources and workbooks on your Tableau Server. As a next step, I wanted to explore how to use the Metadata API to build tools that help teams across an organisation understand their data assets better.

While working as a consultant on various data projects, I noticed a common challenge: teams within the company lack clarity around how some key metrics are defined and calculated in their workbooks, or different teams may have slightly different definitions of the same metric. This can significantly skew any analysis done based on such metrics. To avoid such situations, companies should design an internal data dictionary.

There are different interpretations of what a ‘data dictionary’ is. In general it can be described as a list of definitions for key metrics and data fields that are used across the company, including the ways to calculate them, where applicable. The main idea behind such a dictionary is to eliminate confusion and ambiguity, and make sure that all metrics are understood and calculated in the same consistent way. The dictionary should be made available to everyone in the company, and become the first point of reference for any analysis. I recommend reading this post by Carl Anderson to learn more about some best practices for creating a data dictionary.

In this post I’m going to talk about how to create a data dictionary using Tableau’s Metadata API. What follows below is a detailed walkthrough of this topic that I presented at Phoenix Tableau User Group in October 2020 (slides, recording of the webinar).

Once the Metadata API is enabled, there are two ways to access it:

Whichever way you choose, you will land on GraphiQL, Tableau’s GUI for interacting directly with the Metadata API.

For the purposes of my project, I was connecting to the Metadata API of my personal Tableau Online instance, part of the Tableau Developer programme. If you haven’t already, you can sign-up for Tableau’s Developer programme here.

To query the Metadata API you will use GraphQL, an open-source data query and manipulation language for APIs (not to be confused with Tableau’s GraphiQL in-browser GUI described above). If you haven’t worked with this type of APIs, please refer to my previous blog for more details on how to structure your GraphQL queries. The Metadata API’s documentation has a detailed model of objects and their attributes, and you can also search the documentation embedded in the GraphiQL GUI for a particular object.

In one of my previous projects I worked with Tableau workbooks built by different people, and there were many calculated fields that were either duplicated or not used at all. I spent a lot of time trying to understand what each calculated field did, which fields from the original data set it referenced, and which dashboard it was used in, if any.

So, when I discovered the Metadata API, I wanted to see if I could speed up such investigation, and create a data dictionary of all the calculated fields for all the workbooks on my Tableau Online. In the GraphQL query below I focused on all calculated fields, which fields from which data sources are used in these calculations, as well as any descriptions or comments for such calculated fields.

Here is the final query for this project:

My query is structured as follows: 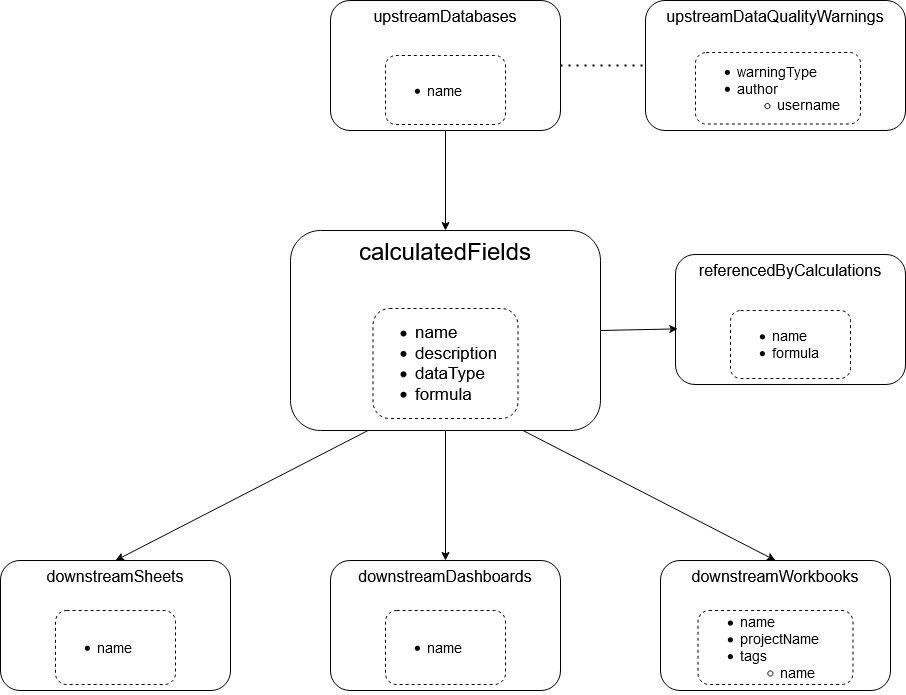 Relationships between objects in the GraphQL query above

Visualising the response in Tableau Desktop

The response from the API comes in JSON format that can be then visualised in Tableau Desktop to make it more user-friendly. For this project, I simply copied the query response as it was displayed in GraphiQL onto a text editor and saved it as a JSON file.

Sending the GraphQL query in GraphiQL. Click on the image to open the full-sized version.

As an aside, you can also automate metadata extraction using Alteryx, Tableau Prep Builder, or programming languages such as Python or R to make sure that your data dictionary stays up to date. In that case you’d need to use Tableau’s REST API for authentication first. You can learn more about how to access your Tableau Server using a Python script in one of my previous posts.

Once I had the JSON file, I selected it as my data source in Tableau Desktop, and designed my data dictionary using a simple tabular format. You can see the final dashboard on my Tableau Public.

Final dashboard. Click on the image to open the full-sized version.

I implemented the following features in this dashboard to make it easier to explore the metadata:

I hope this project gives you a better idea of the value that you and your orgnisation can derive from Tableau’s Metadata API. Of course, this is just one example of a data dictionary. You can modify the query to extract the metadata that is most relevant for your use case. Let me know if you have any questions.