As announced at Tableau Conference’20, Tableau Prep Builder is getting extended spatial support in new releases throughout 2021. Users will be able to connect to spatial data, perform spatial joins, and use spatial calculations such as MAKEPOINT or MAKELINE. To use these spatial calculations your data set should include fields with latitude and longitude values. Sometimes these values are already present in a data set, but sometimes the location data comes only in the form of an address or postcode. In the latter case addresses should be geocoded, i.e. converted into latitude and longitude values that can be used in spatial calculations and visualisations later.

At the time of writing (April 2021), it’s not possible to geocode your data directly in Tableau Prep Builder. However, it can be done by adding a Script step to your workflow, and using a Python or R script. In this post I’ll show how to convert a list of UK postcodes for London fire stations into latitude and longitude in a Tableau Prep flow using the Postcodes.io API. While this API is focused on the UK only, there are other APIs covering the whole world, but they are frequently paid and require authentication to use. You can see a list of frequently used geo APIs at the end of this post. 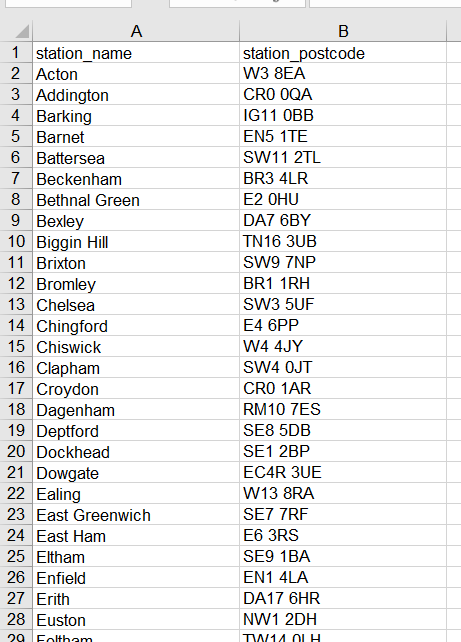 I presented this topic at the Tableau Prep Virtual User Group in December 2020. Here are the webinar’s slides and its recording. You can also refer to my earlier post on connecting to APIs in Tableau Prep Builder for an API refresher.

The overall process can be divided into five steps:

The Postcodes.io API has detailed documentation on their website outlining how to structure a request and what data you will get in the response. You can use this free API to geocode one or a list of postcodes across the UK. You can also use it to reverse geocode latitude and longitude, i.e. convert these values into a physical address, or validate postcodes in your data set.

In the example discussed in this post, we are interested in geocoding a list of postcodes from our data set. That can be done by sending the following POST request to the API, which includes a list of the postcodes that we need to convert. Notice that the list of our postcodes should be formatted as a JSON string:

Extract from the API's documentation.

Now that we understand how the data should be formatted, we can start building the request. Since we will use the list of postcodes from the data that is already in our Tableau Prep flow, we will construct our request URL dynamically, directly in the Python code. In other words, we will define the structure of the URL in the script, but the actual postcode values will be dynamically added to it, depending on the data in our Tableau Prep flow.

Step 2. Write a Python script with the logic of the request

Next, we need to define the base URL, the endpoint of our request, and define the request headers.

After we defined the request’s format, we need to write a function that will hold the logic of our request:

In this example, the function is called bulk_geocode_by_postcode, and it takes the data set from the Input step in our Tableau Prep flow as a Pandas dataframe (df).

Here is how the list of postcodes looks like at this stage when we run the code:

Now that we have the body of the request in the required format, we can send our POST request to the API using the requests library that we imported earlier.

If our request is successful (i.e., we get the 200 code back), the script will return a number of details for each postcode in JSON format, including the country, region, eastings, northings, parliamentary constituency, parish, and, of course, latitude and longitude. 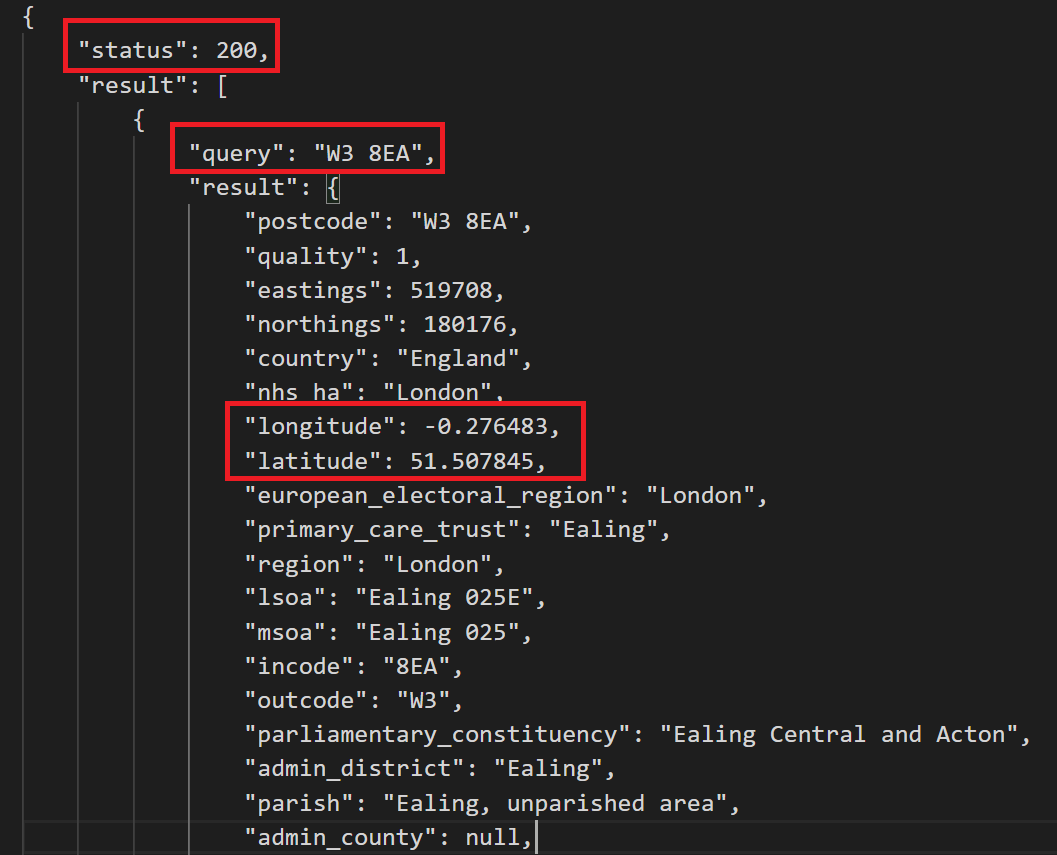 Snippet of the response from the API

The last thing we need to do here is to keep only latitude and longitude values from the response, and convert this list into a Pandas dataframe, i.e. a table that Tableau Prep understands. 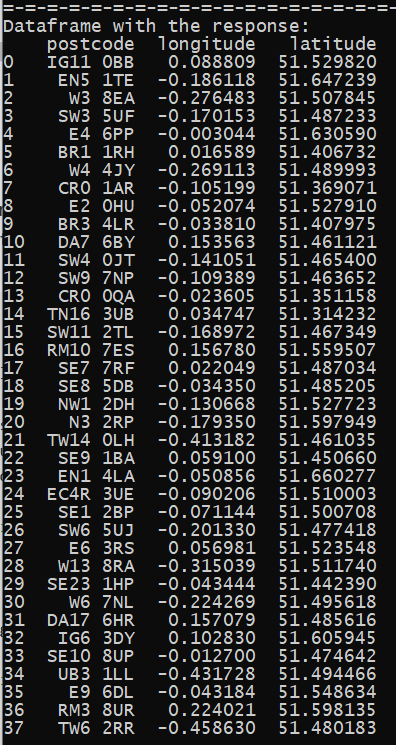 Response from the API converted to a Pandas dataframe.

Before returning the final table from this function, we need to define the structure of the output from the Python script and set the data types for every column to make sure that Tableau Prep interprets the data correctly. To do so we need to include the get_output_schema function to your Python script. You can see the full list of available data types and how to specify them in this function on the Tableau Help website.

Before we can use our Python script in the Tableau Prep flow, we need to install and launch TabPy, or the Tableau Python Server. It is a framework that allows Tableau to execute Python code. For this project, I installed and run TabPy on my local computer, but you can also install it on its own server, so it is always available to run scripts. You can learn how to install TabPy in my previous post.

Once TabPy is up and running, you will see this message: ‘Web service listening on port 9004’. This is the default port for TabPy, and we will need it to establish the connection between TabPy and Tableau Prep Builder in the next step.

After TabPy is launched, we can connect Tableau Prep Builder to it and run Python scripts in our flows. Here is how to do it: 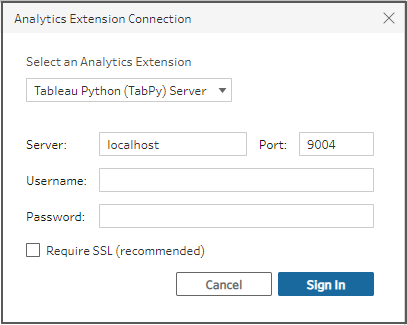 Step 5. Add the Script step in your Tableau Prep flow to convert postcodes into latitude and longitude

Now we can add the script to our Tableau Prep flow using the Script step. The flow for this example consists of only the Input step with the stations_locations.xlsx Excel file and a Clean step. While working with this API, I realised that the maximum number of postcodes it can convert in one go should be up to 50 (even though on the website it says it can be up to 100). So, I added the Rank field to my table and filtered the list to the first 50 postcodes. 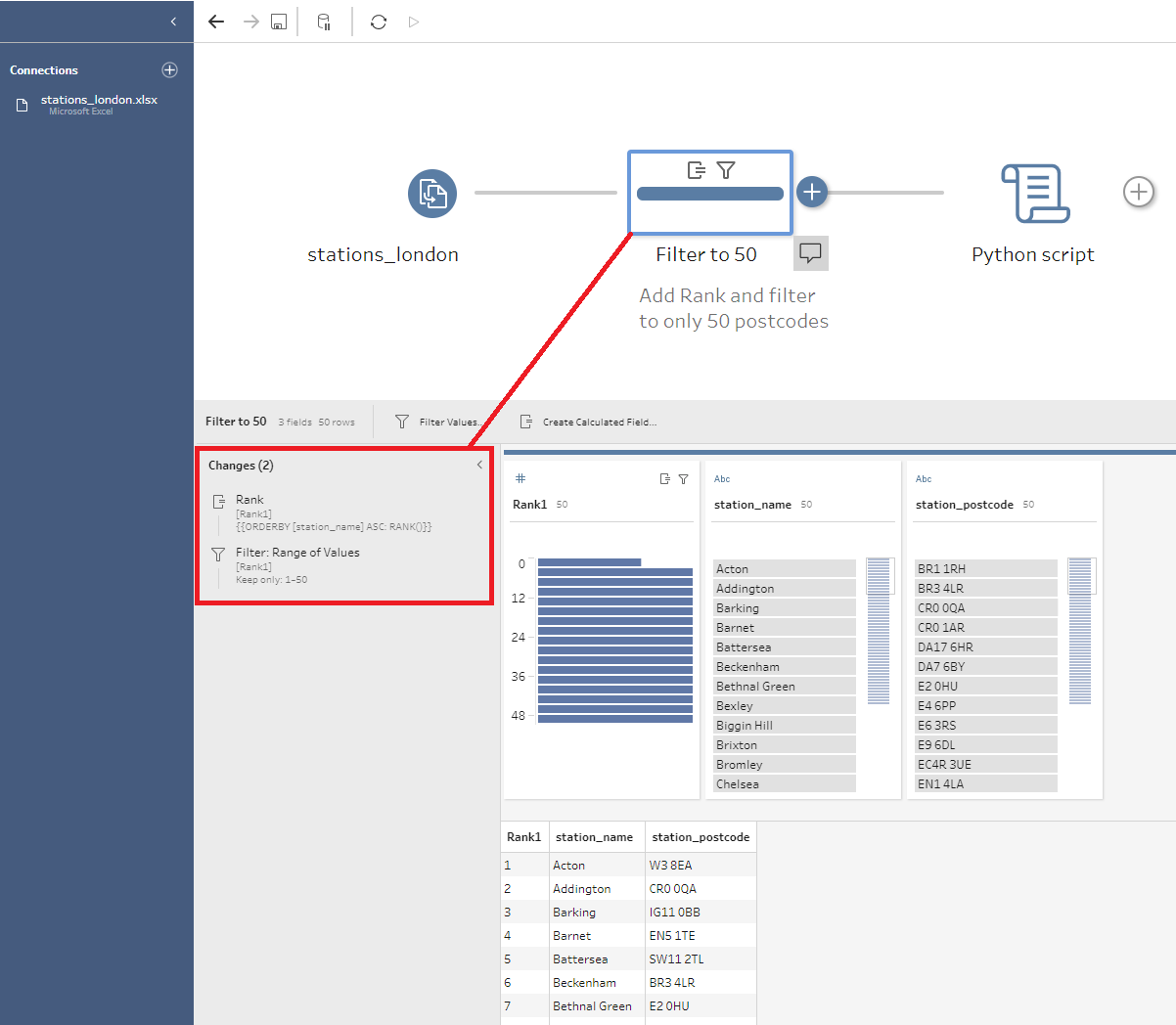 When we add a Script step after the Clean step, we should configure it as follows: 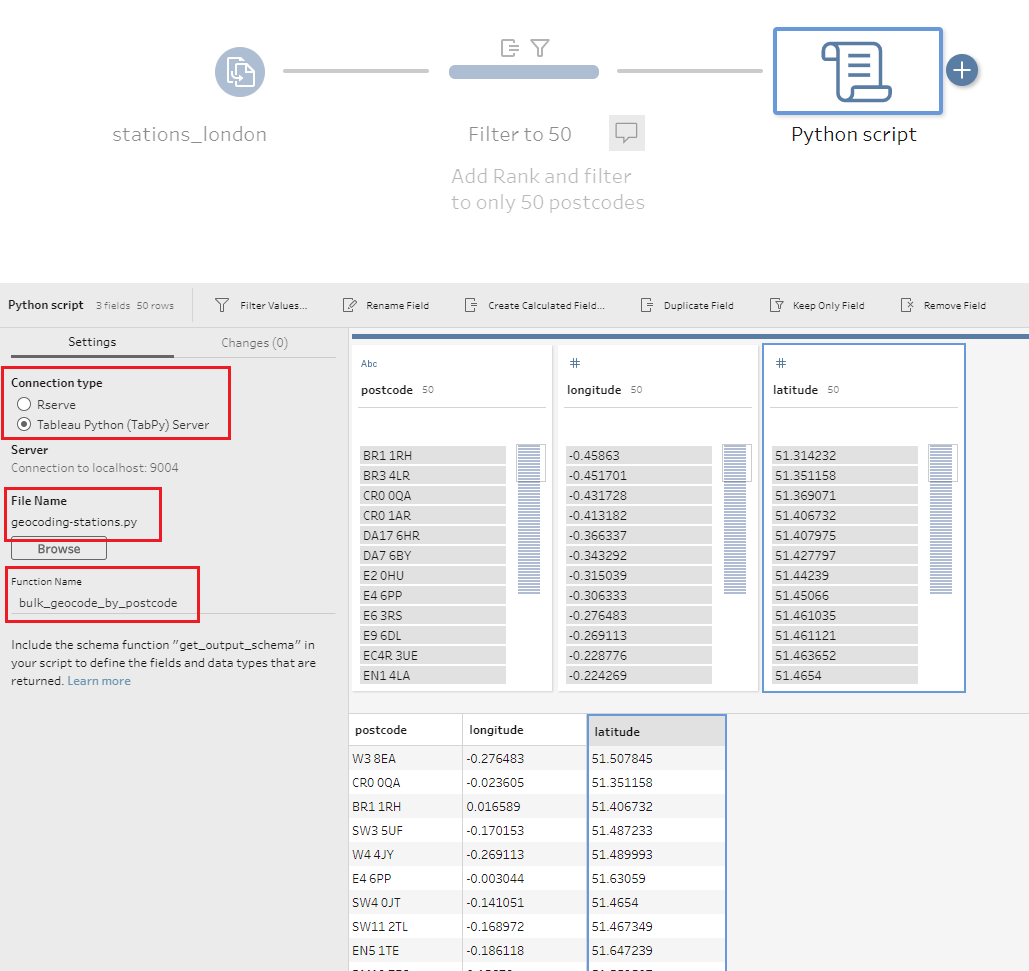 Once you have entered these details, the script will run automatically. You should now have a table with latitude and longitude values for each postcode which can be used further in the flow. Let me know if you have any questions.

You can find my final code and the Tableau Prep flow for this project in this GitHub repository .

Other APIs and Python libraries for geocoding