You can spend weeks, months and years in Rome, exploring its museums, churches, art galleries, and of course, restaurants and bars. But your experience of the city will not be complete if you have not seen it from above. Although it is a well-known fact that Ancient Rome was built on seven hills, the contemporary city significantly grew in size, stretching itself on other hills outside of the historical city walls, west of the Tiber river. Such topographical feature makes Rome a city with one of the best panoramic views in Europe. 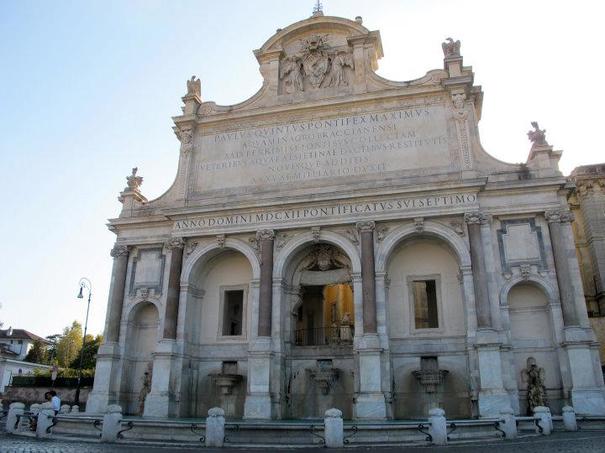 Our walk starts at the Fontana dell’Acqua Paola also known as Il Fontanone, located on  Janiculum (Gianicolo) Hill. The first major fountain on the West bank of the river Tiber, Il Fontanone was built in 1612 to mark the end of the Acqua Paola aqueduct, and its arched structure later influenced the design of the famous Trevi Fountain. 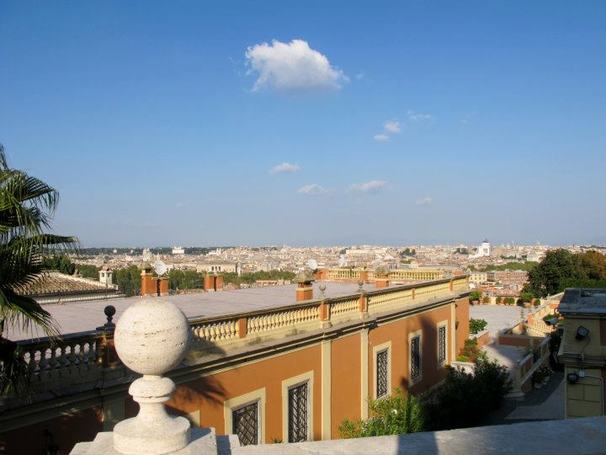 The cozy square in front of the fountain, Belvedere Niccolo Scatoli, is one of the best places in Rome to watch the start of a new day. Spend some time here, watching how the first sun rays illuminate the imposing domes of Roman Baroque churches and the Pantheon, brick medieval bell towers, and red roof tiles.​ 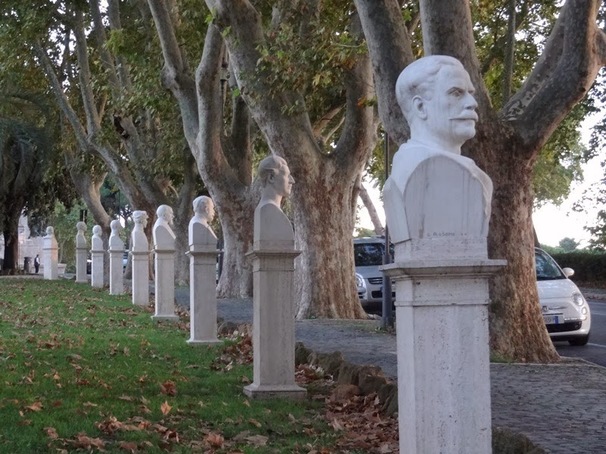 Janiculum Hill provides what may be the widest panoramic view of the city. Go up the hill and along Passeggiata del Gianicolo to see the busts of Italian patriots and foreign individuals, who fought for the unification of Italy as a part of Risorgimento movement at the end of the 19th century.​ 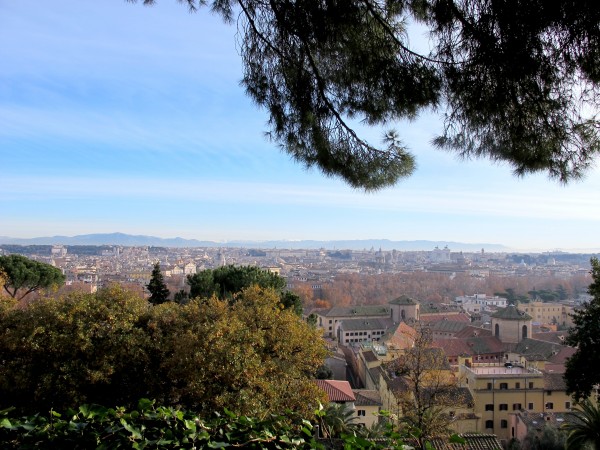 A short walk along the alley brings you to Piazza Giuseppe Garibaldi, dedicated to one of the main generals and politicians of the Risorgimento movement. Here you will have an unobstructed panoramic view of Rome with a little map that indicates the locations in front of you. Continue walking along Passeggiata and see how the city unfolds in front of you.​

Follow the shaded path of Passeggiata all the way until it changes into Viale delle Mura Aurelie, which in turn brings you to the colonnade of St Peter’s Square. Located on the Vatican Hill, St Peter’s Basilica is the tallest building in the city with its dome (cupola) visible from any place in Rome. You can climb the cupola and enjoy the panoramic view of the square and Vatican Gardens. It is open to the public from 8am to 5pm in winter and 8am to 6pm in summer. You can choose to climb all the way up for €6 or take an elevator for €8. ​ While on top, notice the wide straight avenue, Via delle Conciliazione, connecting the Vatican with Castel Sant’Angelo. Construction of this road in 1936 was Benito Mussolini’s controversial decision, which led to the demolition of the entire medieval quarter, and creating the direct access to Castel Sant’Angelo. 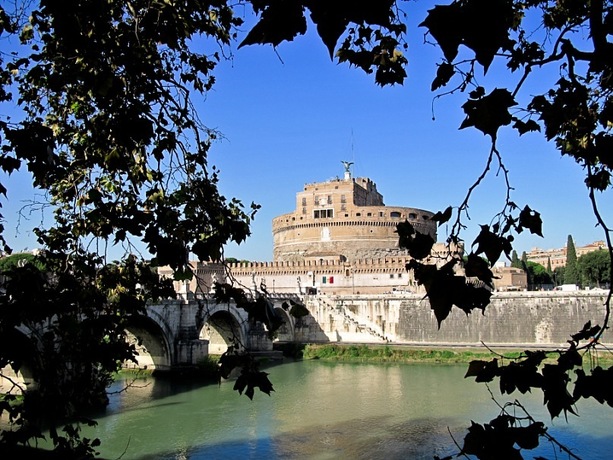 Once you are back to the square, take Via della Conciliazione towards Castel Sant’Angelo, which is our next stop. Built as a mausoleum for Emperor Hadrian in 123 - 139 AD, it served as a prison and papal fortress, and was turned into museum.The National Museum of Castel Sant’Angelo offers not only a varied collection of paintings, sculpture, military memorabilia and medieval firearms, but also lavishly decorated Renaissance interiors.​ 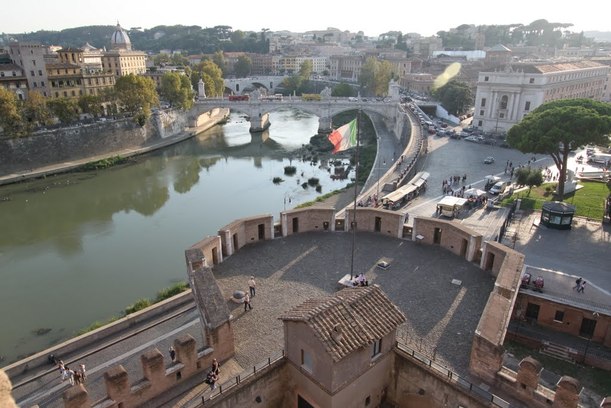 Take a huge spiral ramp to the castle’s rooftop cafe to enjoy the magnificent view over the city, praised in the last scene of Puccini’s opera Tosca. 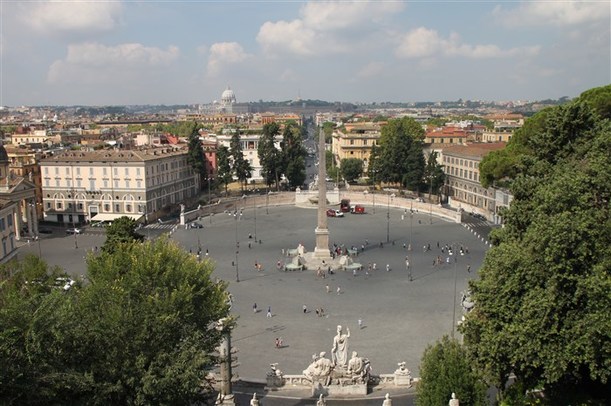 A short walk through the Piazza Cavour and Prati district takes you to Ponte Regina Margherita and then to Piazza del Popolo. From here you can take a short hike to Pincian hill, where you will be rewarded with a marvellous view of Piazza del Popolo with its Egyptian obelisk and St. Peter’s cupola, habitually dominating the Roman skyline. This view is also great in the evening, when the dome and the piazza are beautifully lit. 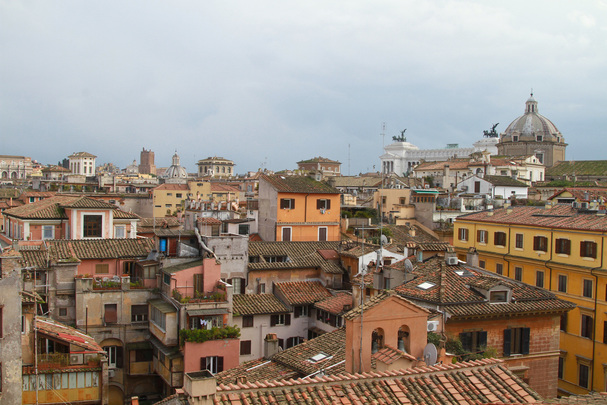 If you need a break along the way, there are several options nearby where you can enjoy a drink or lunch without interrupting your view-hunting. A short walk along Via del Corso will bring you to the rooftop bar at the Hotel Cesàri (Albergo Cesàri), where you can enjoy the view of Roman rooftops and churches and transport yourself to the time when Stendhal (author of The Charterhouse of Parma) stayed at this hotel in the 1880s. 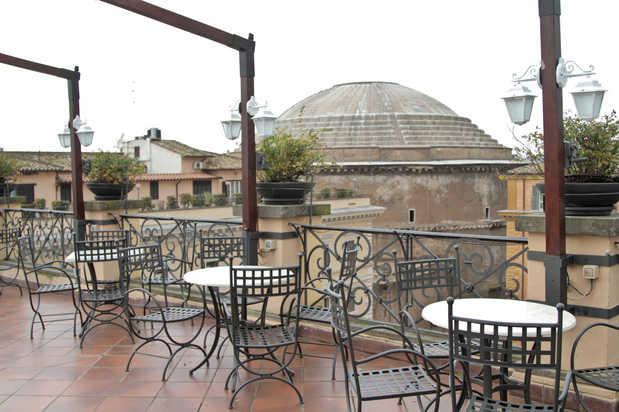 If you would like to have a fresh perspective on a traditional tourist attraction, then do not miss the Grand Hotel De La Minerve, just a stone’s throw away from the Pantheon. This opulent luxury hotel has a hidden gem - the Minerva Roof Garden. You will be engrossed by the magnificent 360-degree view of Rome and will get a rare opportunity to see the Pantheon’s dome up close.​ 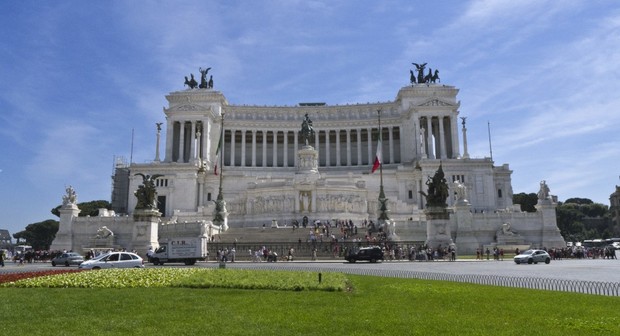 After a short break, continue your way towards Piazza Venezia, where you will find Il Vittoriano monument, also known as the Altar of the Fatherland. The house for the Museum of the Risorgimento (a museum dedicated to the unification of Italy), this monument—opened in 1911—pays homage to Victor Emmanuel II, the first king of Italy after its unification. It also holds the tomb of the unknown soldier with the eternal flame. It is one of the main landmarks of the city today, though it still creates controversy due to its dazzling white marble facade, which stands in stark contrast with the surrounding architecture. 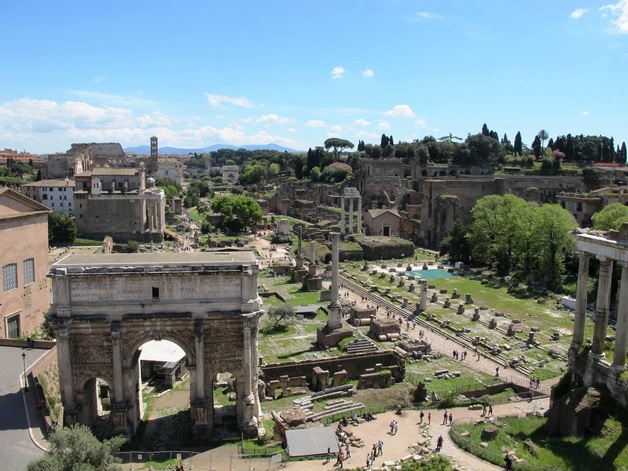 Nicknamed ‘the typewriter’ or ‘the wedding cake’, this monument has one of the most popular viewpoints in Rome—maybe because then you do not have to see the monument itself. Take the lift to the roof-top terrace to experience the breathtaking panoramic view of the Roman Forum, the Colosseum, and Via del Corso. The terrace is open every day from 9:30am to 7:30pm (last entry at 6:45pm), and tickets cost €7 for adults and €3.50 for children.    ​ 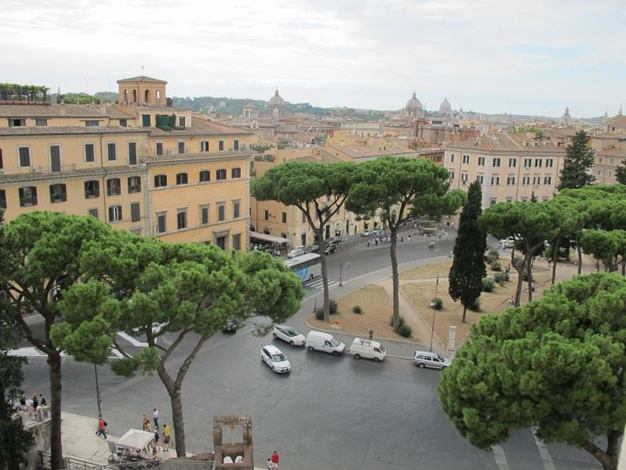 From the top of the monument you can also access Campidoglio, a square on top of Capitoline Hill, without the need to climb further. Designed by Michelangelo, the square faces the Vatican instead of the Roman Forum, reflecting the city’s priorities at the time. Today it is the location of the office of the Roman Mayor and the Capitoline museum, the oldest public museum collection in the world. 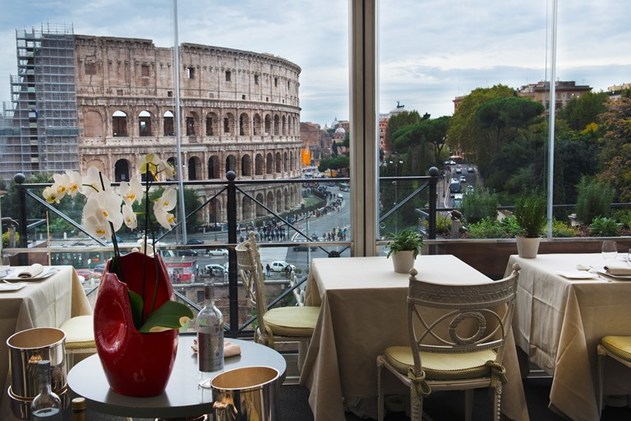 Our next destination is just a short stroll away along Via dei Fori Imperiali. Tacked right behind the Colosseum, Michelin starred Restaurant Aroma at Palazzo Manfredi hotel offers a unique fine dining experience with the magnificent ancient amphitheatre as a backdrop.​ 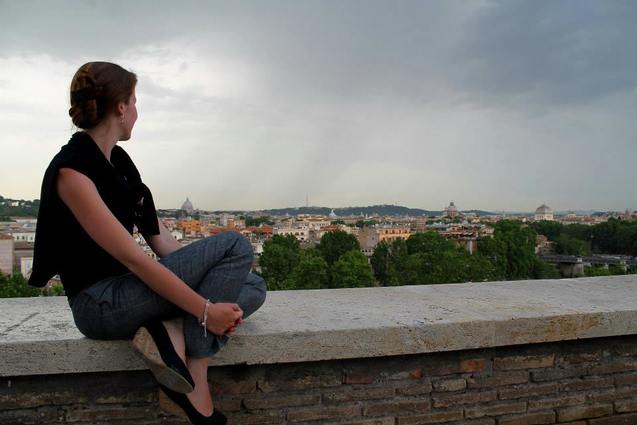 If you wish to finish your day in a romantic setting, continue your journey to the Orange Garden (Giardino degli Aranci) on Aventine Hill, one of the best places in the city to watch the sunset. Walk through the rows of orange trees and enjoy their aroma, which becomes even stronger in the evening. The view from the garden over the river Tiber with the roofs of Trastevere area district, the Jewish Ghetto, and the dome of St. Peter’s is spectacular. Spend some moments watching the sun setting down, and look back on all the amazing things you saw today, which together form Rome.